One of the most adorable creatures on the planet, the rabbit, is also one of the most intelligent. Domesticated rabbits have been around for a long time.

Many people like having rabbits as pets because of their adorable demeanour and babylike features. Instinctual rabbit behaviour should be made plain, since rabbits are territorial creatures.

Your rabbit is humping your cat because it wants to establish its dominance. Rabbits will not appreciate someone else attempting to take their territory.

In this article, we will go through all the reasons why your rabbit keeps humping your cat. So, keep reading!

Why Does My Bunny Keep Humping My Cat?

Mounting is another term that has a similar meaning to humping but is more often used. Rabbits of both sexes use humping as a means of communication and an instinctive activity.

One bunny approaches another from behind or the side as they are humping. That is followed by a manoeuvre in which the rabbit puts itself over the animal’s head or back.

A series of pelvic pushing actions ensues. Rabbit mating positions may be summarised in this way.

Your bunny keeps humping your cat because it wants to assert its dominance. It’s also a means for one rabbit to assert its authority over another animal.

In addition to these two purposes, a rabbit may use humping to communicate with another rabbit.

It’s important to remember that humping is a vital part of many animals’ reproductive processes. Because sexually active male rabbits will hump their female counterparts, it helps your bunnies multiply. Baby bunnies will emerge from the chaos.

It is important for rabbit parents to know that both males and females hump when they are sexually mature. In addition to providing sexual pleasure, humping is used to demonstrate one’s dominance.

Rabbits, like other animals, reach sexual maturity when their hormone levels shift. It’s a sign that your rabbit is ready to reproduce when you see the shift in behaviour.

Some people consider humping to be ‘poor manners’ in the same way as biting, scratching, or eating all the carrots is considered bad behaviour. Some bunnies have been seen huffing and puffing on their human companions. In an attempt to get attention, they go to such lengths.

One of the most effective ways to deal with male humpers is to include a female. She’ll assist him in satisfying his sexual appetite. Alternatively, you may have the animal neutered, which will address the root of the issue.

Will Spaying Or Neutering Stop The Humping Behavior?

There is a prevalent belief that spaying or neutering female and male rabbits would eliminate undesired behaviour. An additional benefit of sterilisation is that it reduces aggressive behaviour. This is because the hormones responsible for aggression aren’t as abundant.

Yes, spaying or neutering will stop your bunny’s humping behaviour. A large majority of the rabbits will benefit from the procedure.

However, this is not always the case. Neutering hasn’t always worked to prevent rabbits from exhibiting humping tendencies.

So, you may wonder, why did the procedure not go as planned?

Even after a rabbit is spayed or neutered, sex hormones will continue to circulate in the body. However, this will be at a much lower level.

As long as the animal is exposed to oestrogen from women and testosterone from men, it will continue to hump.

There is no other reason why it wouldn’t function. Humping is more of a display of power and domination than anything else.

Spayed or neutered rabbits will thus mount other rabbits in order to establish their own domain. Also, they might use their wrath as a means of expression.

How Often Does Rabbit Humping Occur?

Depending on the rabbit species, humping might occur many times a day. Other rabbits may hump just a few times a year.

If you see a rabbit hump, don’t assume it’s because it’s trying to assert its sexual dominance over the animal. Rabbits successfully form bonds via mounting.

In reality, both the mounter and the mounted like it in the majority of cases.

Responses to rabbit humping should not be based just on our feelings. This is due to the fact that our motivations may differ greatly from what we see in our minds.

Personal and cultural labels must also be removed from the equation. We need to pay attention to what’s going on around us. Our decision-making will be easier and more sensible as a result of this.

Rabbits humping may be painful for humans to witness. Rabbits, on the other hand, should have the flexibility to communicate with one another in whichever method works best for them.

Rabbits of the same sex have been seen to hump each other. Bunnies of different sizes and sexual maturities hump over smaller ones.

The animals should be separated if humping raises the danger of injury or conflict. After that period of time has passed, reintroducing the humpers is safe.

Getting a rabbit to stop humping a cat requires a great deal of patience and instruction.

Should I Let My Rabbit Hump On My Cat?

No, you should not let your rabbit hump on your cat. As a pet parent, if you notice this behaviour, you need to spay or neuter your rabbit.

Once your rabbit has been spayed, you can be sure it’s only trying to show its dominance. Even female bunnies will hump other bunnies for no apparent reason. To placate your bunny’s ego, you may give it a soft toy.

However, it’s natural for rabbits to hump. Your bunny humps your cat in order to establish its dominance over the other animal.

In the event of a genuine attack on either end, we recommend that you separate the rabbits. Reintroduce them later in order to create a bond.

How Do I Stop My Female Rabbit From Humping My Cat?

Even though it is a soothing sport for rabbits, mounting may be harmful to your bunny’s health. Humping, for example, may lead to negative repercussions.

Humping may cause injury, fights, and issues with the owner. Because of this, it is imperative that this rabbit behaviour be restricted.

You can stop your female rabbit from humping your cat by following these steps:

Make sure that your rabbit is safe and healthy by monitoring and adjusting its environment. When the rabbits hump each other the most, look for that period of the day.

As long as you pay attention to the signals, you will be able to make sense of everything that is going on.

If you see the animals humping together, do not allow them to stay in close proximity at all times. Separate them before the timers that indicate a certain hour.

In addition, you may relocate them to a new area and alter their daily routine at such times. Maximizing the non-humping time and decreasing the humping time is the goal of this method.

2. Ensure The Safety Of Cats

You should also provide cats with places to hide in order to avoid mounting. As a result, overweight or huge rabbits will be unable to climb on them as a result of this.

If you notice your bunny inflicting harm on your cat, it’s critical that you take precautions to prevent that from happening.

3. Use Treats As Rewards

You may take a risk when the rabbit and cat are near each other but not mounting. Throw out goodies for them as often as possible to keep them from humping.

Get your pets to pay attention to you instead of mounting on each other. You may repeat this trick at least 20 times every day.

Will My Rabbit Change After Being Neutered?

Even after spaying or neutering, your bunny will still be loyal to you and show you affection. It’s possible that he won’t be as needy. However, if the rabbit is neutered at a young age, the core personality tends to remain the same.

What Does It Mean When A Bunny Licks You?

Bunnies groom one another by licking. In order to show their love, rabbits frequently lick one another in the same manner that they groom each other. A lick from a rabbit is a symbol of affection.

Why Does My Bunny Pee On My Bed?

When it comes to fighting for the things they desire, bunnies are territorial like other pets. One of the ways they do this is by marking the sofa or bed with their smell.

In order to stop your bunny from mounting, you may reward him if he chooses not to hump. Give him toys or food as a token of your appreciation for his calm demeanor.

For your bunny to feel in control, you’ll need to give them more room. You may also create raised paths for the rabbit to enjoy extra pleasure.

We hope this article has been able to answer all your queries. If you have any more doubts, drop them below in this comment section. 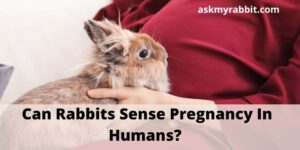 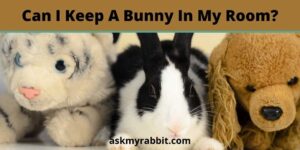 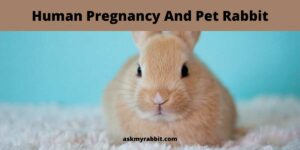