You may have seen your pet bunny eating his own poop and wondered if it’s normal. Do not worry as this is a part of their digestion. We are here to tell you all about it.

Foraging animals that feed primarily on grass are rare. However, this fibrous, cellulose-rich diet isn’t easy to digest. Their supper still retains many of the nutrients the herbivores require after it passes through their intestines.

Rabbits overcome this difficulty by using a kind of digestion known as hindgut fermentation. In other words, they consume their own faeces and digest it twice.

Bunnies produce two types of droppings. These include little black spherical droppings and softer black ones. The soft, black ones are called cecotropes, which are consumed. This is known as coprophagy.

The digestive tract of a rabbit must remain fluid at all times since they must re-ingest their cecotropes in order to obtain the nutrients they require. If anything becomes trapped in a bunny’s esophagus or intestines, they can’t get it out since they can’t vomit.

If you want to learn more about your bunny’s unique defecating habit, keep reading!

Is It Normal For A Rabbit To Eat Its Own Poop?

Cecotropes are a good source of nutrition for rabbits. These unique faeces contain more protein and vitamins than regular faeces. A rabbit can obtain all of the vital elements it needs to be healthy by eating cecotropes.

Rabbits are perfectly normal to consume cecotropes at night or early in the morning. However, they are not normal to eat their usual faeces during the day.

Is It Healthy For Rabbits To Eat Their Own Poop?

Rabbits are meticulous groomers who maintain a high level of hygiene. Licking their feet or brushing the fur on their ears are common sightings.

They may, however, ingest a particular sort of feces when cleansing their bottoms. While this may appear to be the polar opposite of excellent hygiene, there is a solid reason why rabbits do this.

Coprophagia or coprophagy is the word for eating excrement. Your bunny’s major source of nutrition is fibrous hay.

This is supplemented by vegetables and fruit. Their food, however, is high in fibre and cellulose, making it tough to digest.

Even if the meal has made it to the end of the rabbit’s digestive track, not all of the nutrients have been absorbed. Rabbits’ intestinal transit is aided by the fibre in hay, although it is inefficient in certain respects.

Lagomorphs, a group of mammals that includes rabbits and hares, consume their own faeces for this reason. They are able to properly digest their meals and decrease waste as a result of this.

What Happens If Rabbits Eat Their Poop?

You will undoubtedly have observed your rabbit eating its faeces. Coprophagy is a typical behaviour for rabbits, despite the fact that it may appear strange and nasty.

Rabbits consume their excrement because it is an essential element of their digestion.

The digestive tracts of rabbits are incapable of extracting all of the nutrients from food the first time it is digested. Cecotropes are soft pellets produced during the digestive process.

These are high in important nutrients like protein and fibre. Rabbits consume their cecotropes in order to obtain these nutrients by digesting them twice.

Dry, crumbly, and odorless rabbit droppings are the norm. Cecotropes are a kind of dropping that is soft, sticky, and smelly. Because they’re generally eaten right off the anus, you’ll notice less of them in your rabbit’s hutch.

How Often Do Rabbits Eat Their Poop?

Rabbits consume part of their excrement once a day. They consume it either early in the morning or late at night.

Cecotropes, or “night feces,” are these unique feces. They’re made when food is fermented in the cecum, a section of the rabbit’s digestive tract.

Cecotropes are nutrient-rich soft feces that are passed out of the body like regular stool. They are subsequently re-ingested by the rabbit to allow essential nutrients to be reabsorbed.

These faeces contain more protein, less fibre, and higher amounts of some vitamins. These are more nutritious than the normal hard bunny faecal pellets found in litter boxes and around rabbit cages.

While owners are sometimes concerned by their rabbits eating their own excrement, bear in mind that cecotrope ingestion is a natural and necessary aspect of rabbit behavior that will keep their pet healthy.

Owners should not try to keep their rabbits from eating these feces. These cecotropes are only passed once a day. Therefore, there is little danger of an overabundance being ingested.

Yes, rabbits are coprophagous. When excrement is ingested, it is known as coprophagia. Most people find the idea of eating their own excrement disturbing. However, certain animals, such as rabbits, do so for a very good reason.

Coprophagia is a natural, healthy activity in rabbits, but it is frequently discouraged in other animals, such as dog. This is due to the lack of health advantages and the owners’ distaste.

Why Do Rabbits Eat Poop Pellets?

Cecotrophy is the scientific word for this poop-eating rabbit behaviour. Cecotropes or cecal feces are little faecal pellets that develop at night. Caecotrophy is a kind of coprophagy in which an animal eats another’s faeces for any reason.

Because of the unusual digestive mechanism of these herbivorous mammals, eating cecotropes has a nutritional function. The stomach uses acidic digestive fluids to break down food, which is mostly plant matter, and delivers it to the colon via the large and small intestines, although not all of it is easily digested.

What Kind of Poop Do Rabbits Eat?

Rabbits, like other animals and people, remove waste on a regular basis. Fecal matter usually exits a rabbit as a spherical pellet. However, if sufficient fibre and water are not consumed, the form will alter.

Fecal matter is created throughout the day when a rabbit hops around or visits the litter box. However, a rabbit does not swallow these continually produced faecal pellets.

Rabbits emit a particular form of feces at night in addition to the usual fecal pellets they generate during the day. Cecotropes, sometimes known as nocturnal faeces, are a kind of rabbit excrement that is distinct from ordinary stools.

Cecotropes are softer, stickier, and practically never seen by a rabbit owner since they are consumed almost as soon as they leave the body. The cecum, a portion of a rabbit’s digestive system, produces cecotropes by fermenting the food the rabbit consumes.

These feces are only made at night. Therefore, you’ll observe a rabbit consuming them late at night or early in the morning. Cecotropes are usually only found in your rabbit’s cage or on its fur when it is sick and not eating its cecotropes.

Why Is My Rabbit Eating Wrong Poop But Not Cecotropes?

Rabbits are capable of coprophagy, although they are only meant to eat cecotropes. Dry waste droppings are rare for a rabbit to consume.

It’s time to evaluate your rabbit’s diet if you’re certain it’s eating faeces and not cecotropes. If a rabbit does not have enough fibre from other sources, it may consume its own droppings.

Because they contain more calories than hay, they are more attractive to rabbits. Choose a brand with no additional ingredients.

Make sure your rabbit gets enough leafy greens to be healthy. Every day, they should be given a salad quantity the size of their head.

Parsley, arugula, cilantro, and dandelion leaves are all good options. If your rabbit continues to consume poop, it might be due to boredom. Toys to chew and play with are available.

Transfaunation may help certain rabbits who aren’t getting enough nutrients from their cecotropes. Cecotropes from a healthy rabbit are fed to a sick rabbit to help the latter reconstruct a healthy digestive system.

Why Does My Bunnies Poop Smell So Bad?

Stress, sickness, or dietary imbalances can all cause stinky rabbit feces. It’s possible that your rabbit is consuming too much grain, sugar, or fat. It’s a good idea to take your rabbits to the vet if you discover stinky feces in their litter box.

The poo of a rabbit should be dark green, dark brown, or nearly black color. Cecotropes are brown in color. They

How Many Times A Day Do Rabbits Poop?

Bunnies of average size will defecate 200-300 times each day. They should be consistent in size and shape.

Because they’re made up of somewhat insoluble components, daylight faeces are tougher than nighttime faeces. Meanwhile, specific bacteria in the cecum continue to break down the digestible fibre. This finally forms soft pellets that are ejected as nocturnal droppings and eaten by your bunny.

Cecotropes are nutrient-dense, have high protein content, low fibre content, and a variety of vitamins. It also includes B vitamins. These vital nutrients are more easily absorbed the second time around in the softer pellet form.

So, if you notice your pet rabbit eating its own excrement, don’t try to prevent it. Your rabbit is simply looking after its health and digestive system.

Drop down your queries regarding your pet bunny’s quirky defecating habits and we will answer them soon! 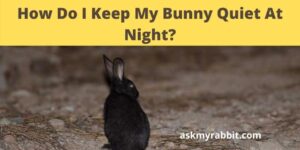 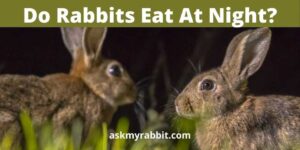