When rabbit nails grow too long and bend too much, they break. Toenails may be readily grabbed and ripped off of your rabbit.

This makes it possible for an infected or bleeding nail to form. The nails of certain rabbits may come off without a trace of blood.

As a precaution, you may clean their wounds with betadine or another skin disinfectant.

In this article, we will inform you about all the ways you can help your bunny if his nail is bleeding. So, keep reading!

Why Is My Rabbit’s Broken Nail Bleeding?

Your rabbit’s nail may be bleeding because you may have cut it too short while trimming. It may also happen if his nails are too long and he ends up breaking them while playing.

Nail ripping and bleeding may be alleviated by exerting some little, steady pressure on the affected area.

Use Nolvasan to thoroughly clean the nail bed. Apply an antibiotic ointment, such as Neosporin, after this.

Neosporin Plus and other cortisone-based products should not be used. Rabbits’ immune systems are weakened by corticosteroids.

Styptic powder or flour may be used to minimize bleeding if any visible nail remains on the nail bed.

Take your rabbit to the vet if you discover an infection. Infections that spread to the bone, if left untreated, may lead to more serious health issues.

How Do I Cut My Rabbit’s Nail?

The chore of clipping your rabbit’s nails may seem onerous at first. Many rabbit owners choose to leave the care of their pets in the hands of a veterinarian.

Visiting the vet on a regular basis, on the other hand, may be quite hectic. To help you get started, here are some tips for trimming your rabbit’s nails at home.

When your rabbit is properly restrained, it is much easier to quickly and effectively trim its nails. To minimize movement and isolate the paws, enlist the help of a friend or family member.

Examine the claw to find the vein in the nail. You should avoid severing this vein, which is known as the quick.

There will be bleeding and some discomfort after cutting the quick. You’ll need a flashlight to view the nails of certain rabbits.

If you cut your rabbit’s nails too short, styptic powder or flour may be used to halt bleeding.

Bunnies are sometimes frightened by the clipping sound. If your rabbit’s nails are really long, you may want to try filing them down instead, but this will take more time.

How Long Does It Take For A Rabbit’s Nail To Stop Bleeding?

The nails of a rabbit that have been torn will usually regrow. However, this might take upwards of six months. Nails develop at a distinct rate for each rabbit.

In certain rabbits, a little stub may be regenerated. Furthermore, if the nail bed has been severely damaged, the fractured claw may never grow again.

To minimize infection after a torn nail, make sure the nail bed is kept clean and dry.

The bleeding in the nail will be reduced in one to two minutes if you apply pressure to the region. The most visible indicators of an infection are any redness or swelling. This might develop during the following twenty four to seventy two hours.

Will A Rabbit’s Nail Stop Bleeding On Its Own?

Yes, a rabbit’s nail may stop bleeding on its own if the quick of your rabbit’s wounded nail is just slightly damaged. To avoid infection, just wipe away the blood with a betadine wipe.

Styptic powder, cornstarch, or flour might be used to stifle your rabbit’s bleeding if the damage to its quick is severe. If the aforementioned approach fails to stop the blood, you may need to take your rabbit to the clinic.

Damage to a rabbit’s nails is extremely unlikely to cause death.

How To Stop Rabbit Nail Bleeding?

In order to stop your rabbit’s nail from bleeding, you may use styptic powder. Small quantities of flour or cornstarch dabbed on your rabbit’s afflicted nail can halt the bleeding until you can apply more substantial amounts.

To avoid additional infection, you should thoroughly clean the wound. You may disinfect your skin with betadine or a comparable product.

Keep an eye on your rabbit’s nails until they’re completely healed. This is to ensure they don’t get infected. If your rabbit is showing signs of infection, you should take him to the doctor right away.

Will My Rabbit’s Nail Grow Back?

Yes, it is possible for your rabbit’s nail to grow back. However, the procedure isn’t always speedy. The nail won’t grow back for at least another six months.

However, this may not occur if the nail bed is badly injured as a consequence of a pulled out nail. A thin, misshapen stub or perhaps no nail will come back if the surgery is unsuccessful.

How To Avoid Torn Nails In Rabbits?

Larger rabbits and those housed in wire-bottom cages are more prone to suffering from torn toenails and painful hocks. If you have a cage with a wire floor, it’s best to put wooden boards on top of it.

In order to avoid torn nails in rabbits, you must keep your rabbit’s nails short. In addition, avoid cages with wire bottoms and anything that your rabbit’s claws may get trapped on.

The nails of a rabbit might become overly long. As they develop, the angle varies, giving the hook its name. Your rabbit’s joints will suffer more wear and tear as a result of the abnormal movement caused by long nails.

Long nails are easily ripped and pulled out. It’s going to hurt, and there’s going to be a lot of blood. When it comes to most circumstances, it’s a simple matter to fix.

Nails that have been broken or damaged in rabbits are typically able to regrow. However, if the nail bed is severely damaged, the nail may never grow again.

What Do I Do If My Rabbit’s Nail Is Bleeding?

Cornflour will stop the bleeding if you accidentally cut your rabbit’s fast. As opposed to using styptic powder, which can hurt the rabbit, this is a far better option.

Will A Rabbit’s Nail Stop Bleeding On Its Own?

If the quick of your rabbit’s wounded nail is just slightly damaged, it may be able to stop bleeding on its own. To avoid infection, just wipe away the blood using a betadine wipe.

How Can I Keep My Rabbit’s Nails Short Without Cutting Them?

In order to keep your rabbit’s nails short, give him daily access to hard surfaces. Let him walk around on them. A piece of plywood within his cage, for example, could make it easier for him to care for his front nails.

If you don’t have styptic powder on hand, you may use cornstarch or flour to stop your rabbit’s nails from bleeding. Betadine may be used to clean the wound and prevent it from becoming infected again.

If the infection in your rabbit’s damaged toenails spreads, get him or her to the doctor as soon as possible. In other cases, toenails that had been torn might not come back at all, or they might grow back just partly.

We hope this article has been able to answer all your queries regarding a rabbit’s bleeding of nails. If you have any more questions, drop them down in the comment box below. 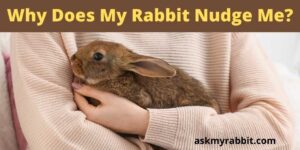