Rabbits are clean animals and there are very few health hazards associated with coexisting with them for the most portion of our lives. However, it is always prudent to be aware of the warning signals and to take actions to attempt to avoid any difficulties from developing. To be clear, health issues caused by rabbits are quite infrequent. Owners need not worry about them.

So, you may be thinking, is rabbit poop harmful to humans?

No, rabbit poop is generally not harmful to humans. Rabbits are known to contain parasites such as tapeworms and roundworms. However, their excrement is not capable of transmitting illnesses to people.

Rabbits create two distinct forms of solid excrement. However, only one of them is typically visible outside of the nest where they live.

These droppings, which are brownish in colour and hard and spherical in shape. They are often seen scattered or heaped up in gardens.

In this article we will inform you all about your bunny and the effects of their poops on humans. So, keep reading!

No, rabbit poop is generally not toxic. Zoonoses are diseases that people may get after interacting with animals. There have been a few zoonoses recorded from pet rabbits. However, none have been shown to be very harmful to otherwise healthy people.

Cheyletiella fur mites are widely seen on the fur of pet rabbits. This may result in a condition known as ‘walking dandruff.’ In humans, they may induce a moderate rash that is irritating most of the time.

If your rabbit has been diagnosed with Cheyletiella and you are afraid that you or a member of your family may have caught the disease, we recommend that you see your primary care physician.

Can You Get Sick From Rabbit Poop?

No, it is generally impossible to get sick from rabbit poop. However, there are a number of diseases that can still get transmitted from rabbits to humans:

Many rabbits have the bacterium Pasteurella multocida in their mouths and nasal passages. This is thought to be one of the probable causes of snuffles. It is a persistent respiratory ailment characterized by sneezing and nasal discharge.

If a rabbit bites a person, this may theoretically result in a Pasteurella wound infection. However, in practice, it is very rare for rabbit bites to get infected with Pasteurella at all. There are two factors contributing to this.

First, bites from omnivorous or carnivorous animals are significantly more likely than those from a herbivore rabbit to get infected. Second, rabbits’ teeth are chisel-shaped. Therefore, the bite wounds are broader at the top than they are at the bottom. This promotes rapid wound healing and prevents infection.

It is usually prudent to properly treat a bite with soap and water as quickly as possible. However, it is also important that any vaccinations be kept up to date.

The vast majority of young adults in America have had their vaccinations. Children who are up to date on their immunizations are also protected. Therefore, the chance of catching a disease from your bunny is very low.

Bordetella bronchiseptica is another respiratory system bacterium that may produce snuffles. This is sometimes identified in rabbits that are otherwise healthy. Bacteria may also cause whooping cough in humans.

There have been cases of B. bronchiseptica producing a minor, self-limiting coughing disease in people. However, only those who are severely immunocompromised should be worried about the bacteria’s presence.

Rabbits may get infected with fleas. This can later attack people. Pet rabbits are seldom infected with the rabbit flea, unless they are kept in an environment where they have come into touch with wild rabbits.

Multi-species homes need a multi-species flea management approach. This is now much simpler to implement thanks to the availability of treatments that are expressly approved for a variety of pets. Never use flea control products on rabbits that have not been approved for use on rabbits.

Ringworm is a fungal illness and it may be transmitted from rabbit to human and vice versa. Both the diseased rabbit and the infected person need medical attention.

E. cuniculi is a parasite that is responsible for a wide range of health issues in pet rabbits. E. cuniculi is capable of infecting people. However, it is only considered a threat to those who are extremely immunocompromised. If you have a severely compromised immune system, it is recommended that you consult with your doctor about the hazards of using this medication.

The majority of rabbit owners do not have to be concerned about contracting infections from their pet rabbits. A few exceptions to the norm would be those who are very immunocompromised. Due to the fact that their immune systems may not be powerful enough to protect them from viruses, these people must exercise additional caution while around all animals.

Those who are immunocompromised and come into contact with ill rabbits are especially vulnerable. Pet owners who have medical issues that have a significant impact on immune function should see their doctor and their veterinarian for more detailed recommendations.

Is It Safe To Touch Rabbit Poop?

No, it is not safe to touch rabbit poop. Aside from the gross element, illnesses may be spread via contact with the rabbit.

Encephalitozoonosis is caused by a parasite that is transferred via the urine. It may affect children who already have a weaker immune system. Salmonella is a bacterium that may cause bloody diarrhoea, vomiting, and fever in susceptible individuals.

We recommend that you maintain strict hygiene standards for yourself when you interact with your pet. This includes never eating while you are interacting with them. Also, do not pick up rabbit droppings with your bare hands. If you do come into touch with droppings, make sure that you wash your hands immediately.

No, humans cannot eat rabbit poop. Eating them is not very healthy for humans either.

Those spherical, dry droppings you observe are the result of the rabbit’s second passage through the digestive system. By the time the rabbit excretes its droppings, every ounce of nutrients has been leached from the plants it has been eating for months.

Healthy animals’ urine is commonly regarded to provide little to no harm to humans. This is typically true, at least for the general population of otherwise healthy humans. However, as with most things in infectious illnesses, there are exceptions to every rule.

What Would Happen If You Ate Rabbit Poop?

In most circumstances, ingesting little quantities of rabbit poop will not result in a health hazard. However, it is crucial to remember that many of the diseases and parasites can be transmitted in this manner.

Therefore, we recommend that you do not ingest rabbit poop. It may harm your health.

What Disease Can You Get From Rabbit Poop?

Individuals who have been exposed to rabbits and rabbit housing conditions may develop allergic responses to the proteins found in rabbits’ droppings and poop. Allergies due to rabbit hair, saliva, urine are also possible.

Personnel may be exposed to allergens by inhalation, contact with the skin, eyes, and mucous membranes. Animal allergies may be found in a variety of sources, including animal hair, skin, urine, saliva, and any contaminated feed or bedding materials. A history of past animal allergies is one of the most significant risk factors for having an allergic response.

In addition to nasal discharge, congestion, conjunctivitis, skin redness, a rash or hives, allergic reactions may cause a variety of other symptoms. Individuals experiencing symptoms indicative of an allergic response to a workplace allergen should disclose their concerns to their supervisor and seek medical attention.

How Can I Prevent Catching Diseases From Rabbits?

You can protect yourself from catching diseases from rabbits by following the fundamental hygiene routines outlined below:

Most essential, acquaint yourself with any possible zoonotic illnesses that may be connected with any of these species. If you have any reason to believe that you have contracted a zoonotic illness, you should immediately get medical attention.

Rabbits not only have the ability and desire to fart, but they are also required to fart. While farts are frequently amusing, they are not amusing for rabbits. This is because the gas build-up is exceedingly uncomfortable and may soon become lethal if not properly evacuated. This may necessitate the need for veterinary intervention in certain cases.

No, rabbits cannot puke. They are unable to vomit due to their physical inability. The physiology of the rabbit digestive tract is such that rabbits are unable to vomit on their own will. Also, eating fur may cause major difficulties such as wool block and slow motility. This when paired with a low-fiber diet is one of the key reasons why it can cause such a wide range of health problems.

Why Is Rabbit Pee White?

Any of these possible zoonotic diseases may be prevented by following a few simple procedures that are common sense. In addition to keeping children away from known contaminated areas, closely monitoring infants.

Also, discouraging habits like pica and encouraging routine hand washing after contact with outside areas or after handling animals.

We hope this article has been able to answer all your doubts and queries. If you have any more questions, drop them in the comment section below. 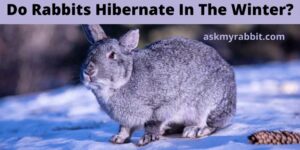