While watching television, rabbits often approach their owners. The behavior is most prevalent at night. However, it may occur at any time.

Rabbits like socializing with humans. A person is usually calm when watching television. This implies a rabbit can sleep next to us or enjoy caressing while watching TV.

You’ll probably touch your bunny instinctively when she crawls onto your lap. This establishes a mental link in your rabbit’s head. When you turn on the television, you are giving her equal attention.

Rabbits are unable to comprehend the words or plot of a television show. The mix of music and picture just stimulates their minds. When a rabbit watches the correct TV programme, it enters a trance-like condition.

In this article, we will inform you all about rabbits watching television. So, keep reading!

Rabbits, like humans, have a body clock. Most pet bunnies are as exhausted as we are by the time nightfall approaches. Rabbits like spending time with their owners and frequently seem to be watching television.

Yes, rabbits like to watch television. Your rabbit may be glued to the television. Television gives mental stimulation to rabbits because they appreciate moving pictures and sounds.

Just keep an eye on the volume. Rabbits have good hearing, therefore a loud television may be irritating to them.

While you’re gone, you may leave the television on. This will give your bunny some ‘companion.’ However, television does not replace human care. Therefore, you should never neglect your pet simply because the television is on.

Rabbits have their own preferences in terms of television shows and programming. Anything that fits the stimulation criterion will appeal to a rabbit.

A rabbit’s will love to watch a television programme that would include:

A rabbit will be transfixed by the mix of sight and sound. Even great if the presentation includes music.

Rabbits develop the ability to detect music. Your bunny will reply if a favorite music begins to play.

It’s possible that your rabbit may have a favourite show as a result of this. If your pet is enthralled by a show, she may recall the theme music. When your pet hears this music in the future, he will approach the television.

Rabbits have weak color vision, according to research. Rabbits are drawn to TV programmes with vibrant and diverse color palettes.

Images that are static will be boring. The news, chat programmes, and soap operas are unlikely to elicit a reaction.

The following might be some of your rabbit’s favourite shows:

Keep an eye on the volume. A rabbit’s big ears are sensitive. Loud, sudden sounds may startle your pet and perhaps induce a heart attack.

Will A Rabbit Be Scared By Images On TV?

Yes, a rabbit will be scared by the images on the television. If your rabbit smells a predator, she will get terrified right away. This might be the situation with television visuals. A snake on television, for example, may cause rabbits to become fearful.

A rabbit’s instinctual dread of snakes is hardwired. Anything with sharp teeth is the same. Sounds will elicit a response as well. A rabbit may retreat to her hutch if she hears a bird of prey.

For bunnies, nature programmes are intriguing, yet scary. Animals that move and act similarly to your pet will pique your pet’s interest. The sight and sound of predators will make you nervous.

However, exposure therapy gives a solution to this problem. Human-handled baby bunnies will not be afraid of people as adults. The same is true for your rabbit’s television.

Your pet will eventually learn that static visuals cannot hurt her. Do not compel your bunny to keep an eye on you. Allow her to continue watching if she is enthralled yet terrified. Assuage her fears by assuring her that she is secure.

Be aware of your personal reactions to visuals on the screen as well. Rabbits have an instinctive understanding of human emotions.

Your heart rate will rise if you are scared by a horror movie, for example. Your rabbit will become vigilant as a result of this. She’ll think you’re both in danger.

How Much TV Is Safe For Rabbits?

Rabbits have a limited attention span. The flashing pictures and sounds originating from a television will soon become monotonous. Your pet will find something else to occupy his or her time.

The majority of rabbits will restrict their nighttime TV viewing to an hour or two. This is generally safe for rabbits.

During the day, a rabbit should not seek for screen time. It is a worry if your pet prefers to relax on the couch rather than exercise.

For rabbits, television is not a substitute for attention. Your pet is not enthralled in a show if she looks at the TV all day. Her sluggishness might be a sign of physical disease or despair.

Your bunny will need to take breaks from the screen on a frequent basis. A rabbit may easily get overstimulated. A rabbit’s heart rate might be raised by too much noise or vision. This may put your pet in danger and she might have a stroke.

Can My Rabbit Hate Watching TV?

Your pet may have no idea what a television is. She just knows it makes a lot of noise. Alternatively, your rabbit may believe that watching TV implies she is being ignored.

If your rabbit has a strong dislike for television, it will show in her body language. She’ll tuck her ears down and turn away from the TV.

It’s unreasonable to expect you to never watch television. You can’t forget about your bunny, either. In your rabbit’s mind, you must create favorable connections.

This may be accomplished by establishing a routine for your pet:

On your lap, pet and groom your bunny. Keep your eyes peeled for her to begin purring.

While continuing caressing and brushing, turn on the TV at a low level.

Your rabbit will eventually cease being afraid of the television. She will view watching TV to be a kind of social engagement. This will become your rabbit’s favorite part of the day.

Why Does My Rabbit Bite Me While I Watch TV?

Rabbits are fascinated by television, but only for a short time. Rabbits don’t like it when they’re neglected. She may bite you if you are too engaged in television to touch your bunny.

Biting is usually a rabbit’s final option. Your rabbit will not bite if you respond to early, more subtle pleas for attention. These are some of them:

Your pet will have no objections to you watching television. If she’s had enough activity, she’ll most likely join in. However, you could be asked to pet and groom her at the same time.

What Do Rabbits See When They Appear To Watch TV?

A rabbit’s eyesight developed under quite different conditions than our own. Humans have forward-facing eyes and great color vision.

The eyesight of a rabbit, on the other hand, has developed to detect predators approaching from practically any direction. Rabbits’ eyes are high on the sides of their skulls. It gives them a view of almost 360 degrees.

They are also farsighted, allowing them to see danger from far away predators. They can see it frequently before they are spotted.

A rabbit’s 360-degree eyesight comes at a cost. A little blind area in front of their eyes where their range of vision overlaps.

The blind area hinders a rabbit from seeing close items in three dimensions. This is why you’ll frequently observe rabbits tilting their heads to get a good look at anything immediately in front of them.

When it comes to color vision, rabbits are restricted. While humans can see many wavelengths of light as different colors of the rainbow, rabbits can only distinguish the wavelengths that we recognize.

A rabbit’s eyesight is also far grainier than ours. However, they can still distinguish a person based on speech, body movement, and scent. This compensates for the poor color recognition and definition.

Yes, rabbits do need entertainment. Rabbits like exploring and will gladly play with a variety of pet-safe toys. This is a fantastic way to keep them active. Rabbits like hopping, playing, and foraging. Disperse food throughout their safe haven and let them to find it.

How Many Hours Can Rabbits Be Left Alone?

You may comfortably leave your rabbit alone for six to ten hours throughout the day. Rabbits like company, but they won’t be harmed if they spend their days alone.

Do Rabbits Get Attached To One Person?

Once a link is created, rabbits seem to get attracted to that individual. This bond takes time, patience, and a significant amount of effort to form. An attachment, on the other hand, takes a little longer. It might take new bunnies anywhere from a few weeks to a few months to build a bond with their owners.

It is assumed that they’re drawn to the moving visuals on the screen. However, don’t allow your rabbit to develop square eyes. They, too, need exercise in order to leave a healthy life.

We recommend that you drop down your television watching habits in the comment section below. We will answer them soon! 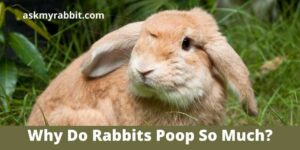