Darkness doesn’t scare rabbits. Yes, they do need light sometimes as they cannot see in pitch darkness. But like some other animals, rabbits’ eyes are also accustomed to seeing things in dim light, but not in extremely dark places.

Rabbits don’t get scared of the dark all the time, but they really get affected by strange noises. Sometimes they get pompous about strange smells or unusual scents which they are not familiar with.

Rabbits’ body clocks need the contrast of light and darkness on a daily basis to moderate their body functions. Wild rabbits get a bit accustomed to forest darkness, but when it comes to pet rabbits, they are not accustomed to that.

Moreover, if a rabbit smells or hears something that is unusual for them or they are not familiar with, then it will get spooky for them. Rabbits tend to enjoy natural light all day.

So, should you keep your lights off at night? Does your rabbit actually like to have the lights on at night? Are they scared of the dark? And is it okay for them to sleep in the dark?

All these questions will be answered below, so just keep on reading!

Should I Turn The Lights Off For My Rabbit At Night?

So turning the lights off will not cause any harm to rabbits. In fact, it can be a helpful idea for them as excessive light during the night can stress them out in the long term.

Technically, rabbits are seen to be more active during dawn and dusk times. These little creatures really have a complicated lifestyle and always try to get into the habitat around them in an appropriate way.

Domesticated rabbits do not face all these cases most of the time as they live a well-pampered life, but in the case of wild rabbits, they need to be more careful in the darkness of the forest where they can be attacked by predators at any time.

When the sun begins to set, rabbits become more active at foraging, caring for their young, maintaining their dens, and socializing.

And being a non-diurnal creatures, they get back to their burrows when the morning light comes up.

You should try to keep your rabbit’s home where there is a lot of natural light so that they don’t need too much artificial light as keeping them in constant darkness or light can develop a lot of stress to them. And being in constant light also affects their fertility and retinal damage.

No, rabbits don’t like much light at night. Dim light for them is okay, but if it is too bright then they can get irritated by that.

As a result, rabbits do not require a nightlight. But there should not be pitch black darkness as that will cause stress issues for them.

Patterns of natural light and darkness are very important to your rabbit’s overall health. It helps them to keep a balance in their body functioning patterns.

It would not be a correct statement to say that rabbits are afraid of the dark. The actual case is, that they put up a guard when they inhale some foreign smell or hear a suspicious sound or voice, especially in the dark.

So they are not afraid of the dark; they are just not able to see clearly in the inky black surroundings. That is why it is okay to keep them in a dimly lit area to make them comfortable.

On top of that, if rabbits are in a safe place, then they will not get afraid of anything.

Are Rabbits Scared Of The Dark?

Rabbits are not nocturnal animals, which means they don’t show much activity at night. However, this does not imply that they are afraid of the dark; this is far from the case.

Rabbits are afraid of dangerous environments, predators, or people who make them feel unsafe, and it takes time to get used to them.

A rabbit’s night vision is greatly superior to that of a human if you actually compare it. They also have a 360-degree field of vision, which is that they can see everything in a wide area without the need to move their head or body.

Rabbits really have an excellent sense of hearing and incredible listening abilities, which leads them to be able to easily recognize danger.

They can also smell easily if any unidentified scent comes into their area, which gets them alerted if they sense any danger near them.

Similarly, for any foreign or unfamiliar voice or sound they hear, they quickly catch on that they’re not around their own people, and it can be a sign for them to get alert before an upcoming danger.

Darkness by itself doesn’t scare a rabbit. They cannot see in very dark areas, or it can be said that they are unable to see in pitch black or inky black areas. But rabbits can see in dull light, as they don’t have the need for much bright light for things to be visible to them.

Is It Okay For Bunnies To Sleep In The Dark?

Bunnies are known for their burrowing habits, or you can say that they are known to be burrowing animals. They dig into the soil to make burrows that act as their shelters. Yes, these burrows are their home or shelter where they sleep, hide and protect themselves.

Their tunnels spread wide in a huge area and are called “warrens.” So, these warrens are all dark and they don’t have any light underground inside their warrens. So they have to live in dark places, which proves the fact that it is perfectly alright for them to sleep in the dark.

Rabbits spend much of their lives underground in the dark warrens. It can be said that their safe place is a dark, hidden place.

So, factually, if they are living in such a dark place, then they will not get scared of the dark.

As wild rabbits get accustomed to this darkness, this is not an issue for them. Domestic rabbits are slightly concerned about inky black darkness, but not significantly because even if they cannot see clearly, they have excellent hearing and smelling abilities, allowing them to detect any danger quickly.

Domestic rabbits do not need bright light at night. Dim or dull light also works for them.

Should I Let My Rabbit Roam Free At Night?

It does not sound like a good idea to let your rabbit roam around at night. Yes, rabbits are social animals and like to play around and enjoy their own time observing nature and the world around them.

And these little bunnies are fur balls with various emotions stuffed inside, so they can be moody and can show or throw their tantrums on you to let them explore the world at the time.

But it is not a good idea at all because there are many predators that are waiting for them outside the house, and due to the pitch-black surroundings at nighttime; they may not get enough time to save themselves or to predict the danger around them.

Moreover, rabbits have the habit of chewing everything in sight. So they can chew electrical cables, or worse, they could electrocute themselves or even start a fire.

Do Rabbits Sleep At Night?

No way! These little creatures do not sleep at night. Rabbits are not among those animals that are hyperactive only at night and do all their work in the darkness while the rest of the world sleeps, nor are they among those that are hyperactive in the morning when the sun is above their heads. They only get active at dusk and dawn. Typically, rabbits sleep for approximately 11 hours a day. So these 11 hours can be at any time, except dusk and dawn, because they spend all of their energy at that time only.

What Do Pet Rabbits Do At Night?

Evenings tend to be the most sociable and relaxing time for rabbits. When they simply like to cuddle, and most of the time, these pet rabbits are seen to settle down in front of the television and enjoy watching shows with their owners. Pet rabbits sleep or relax at night because they sleep for about eleven hours a day and this time is also spent during the day. So rabbits do not always sleep at night, but they do make themselves at home comfortable by doing nothing and just chilling by lying down and enjoying their owners. They can also be seen grooming themselves thoroughly and starting to forage for food.

Rabbits don’t have problems in very dark environments, as if it’s dark outside, they only have to activate their special ability to hear and smell senses as their ultimate defense move.

They are able to see things in dull light and it gets a little difficult in pitch black areas, but as for wild rabbits, they are habitual of this. Wild rabbits live in warrens as they are shelters that do not have any kind of light source.

So rabbits are not afraid of the dark; they simply need to be more vigilant at night to protect themselves from predators. 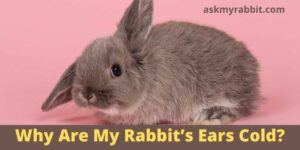