Rabbits have strong olfactory abilities. They utilize this to live in the wild, as do most prey animals. As a consequence, even tamed rabbits are able to sense pheromone changes in humans.

Yes, rabbits can sense pregnancy in humans. Pregnancy brings forth some of the most dramatic changes in the human body. This implies that your rabbit will surely become aware that you are pregnant. Their reaction is determined by their own personality.

When their owners are pregnant, many rabbits grow more clingy. They’ll be hesitant to leave your side. According to popular belief, this is due to a rabbit’s protective nature. If you’ve formed a relationship, the rabbit will consider you a member of the family.

When their owners get pregnant, some rabbits begin to act out. They have the potential to bite and nip their person. They may also vent their frustrations on other rabbits. In this case, the rabbit is most likely envious and terrified.

To have a good relationship, you must first understand your rabbit’s feelings and how they exhibit them. Managing your own feelings around your bunny is possibly even more crucial. Keep the atmosphere bright and positive for your rabbit. If you can do it, your pet will sense and reflect your happiness.

In this article we will inform you all about rabbits and pregnancy. So, keep reading!

Can A Rabbit Tell If A Woman Is Pregnant?

Yes, a rabbit can tell if a woman is pregnant. Rabbits have sharp senses and they can detect changes in emotions of their human owners.

Dr. Maurice Friedman of the University of Pennsylvania Medical School made a surprising finding in the early 1930s. By putting a woman’s urine into a female rabbit, he discovered that he could tell whether she was pregnant.

Animals have long played a key part in human efforts to comprehend natural processes. Humans have a long history of experimenting on other animals, from ancient augurs’ efforts to current AIDS research employing mice and rhesus monkeys. Several animal studies, known as bioassays, have resulted in significant advances in medical knowledge.

Hormones were discovered in the late 1890s by scientists. A hormone is a live cell’s organic substance. It governs certain cellular functions like growth and reproduction.

Scientists discovered a hormone called human chorionic gonadotropin in the 1920s (hCG). Pregnant women’s blood and urine contain virtually entirely this hormone. It is a hormone generated by the growing placenta that aids in the maintenance of pregnancy and the growth of the fetus. The hormone is produced by the body as early as six days after conception and quits after the baby is born.

German chemist Selmar Aschheim and gynaecologist Bernhard Zondek were intrigued by these features. They set out to create a technique of testing for hCG in urine. They decided to take advantage of the fact that hormones from one animal may cause biological reactions in other species’ bodies.

By injecting female mice with a pregnant woman’s urine, Aschheim and Zondek were able to activate the mice’s ovaries and force them to go into heat within a few days. The A-Z Exam was the name given to this test.

Injecting urine into female rabbits yields findings similar to the A-Z Test. The urine triggers changes in the rabbit’s ovaries within a few days if hCG is present. hCG works by tricking the rabbit’s body into believing it’s pregnant for a short period of time.

As a result, the ovaries of rabbits develop corpora lutea and corpora hemorrhagica. These are transitory tissue formations. Doctors may then look for these growths to see whether hCG is present.

While the expression “the rabbit died” is sometimes used as an old-fashioned manner of expressing a woman’s pregnancy, the rabbit was not killed or tortured by the urine injection. Unfortunately for the rabbit, euthanizing and dissecting the animal was the quickest method to inspect the ovaries. Whether the surgery yielded a favorable or negative outcome for the patient, it was a test that every rabbit failed.

Although the rabbit test is no longer used, current EPTs still use many of the same concepts as the wheat and barley tests used in ancient Egypt. By comparing human bodily fluids to other biological materials and evaluating the outcomes, the tests may identify the existence of hCG.

What Is The Rabbit Test For Pregnancy?

Human chorionic gonadotropin (hCG) is a hormone generated during pregnancy. This hormone may be detected in a pregnant woman’s urine and blood. This helps in indicating the existence of a fertilized egg implanted.

Selmar Aschheim and Bernhard Zondek created an exam known as the AZ test. When urine from a pregnant woman was put into immature female mice, their ovaries became larger and showed signs of follicular development. With an error rate of less than 2%, the test was declared trustworthy.

Friedman and Lapham’s experiment was called the Rabbit Test for detecting pregnancy. In the test, the rabbit would be dissected a few days following the injection and the size of her ovaries measured.

The rabbit test for pregnancy became a commonly used animal-based test. The phrase ‘Rabbit Test’ was first used in 1949. It is the source of the euphemism ‘the rabbit died’,  which refers to a positive pregnancy test.

The term was inspired by a widespread misunderstanding about the exam. While many people imagined that the injected rabbit would only die if the lady was pregnant, all of the rabbits used in the test died since the ovaries had to be surgically accessed.

Did They Use Rabbits For Pregnancy Tests?

Yes, physicians used to use a rabbit or other small animal to test for pregnancy. Pregnancy tests were performed by injecting a woman’s urine into the ovaries of a tiny animal from.

Human chorionic gonadotropin (hCG) is a hormone found in the urine of pregnant women. It causes deformities in the ovaries of certain animals. Scientists could identify whether the lady producing the urine was pregnant by cutting up an injected animal and looking at her ovaries.

Because rabbits were so often employed, pregnancy tests were known as rabbit tests. The phrase “the rabbit died” indicated someone was pregnant. This is despite the fact that the rabbit was killed in both cases. It was formerly thought that the rabbit would only die if the test was positive.

The rabbit experiment was not only cruel, but it was also lousy science. It took forty-eight hours, and it was both costly and inaccurate. If the test was inconclusive, it was often necessary to sacrifice many animals.

As a result, in vitro tests, such as those used in modern-day home pregnancy tests, have largely supplanted the antiquated animal test. These tests use a basic chemical that changes color in the presence of hCG to detect the same hormone, hCG.

This simple test can be done in the privacy of your own home in minutes using an over-the-counter gadget that costs just a few dollars. Also, no animals are involved in this test. All animal experiments would be substantially better for women if they followed the rabbit test’s lead.

Why Did They Say The Rabbit Died When Pregnant?

The term “The Rabbit Died” was formerly used to describe a positive pregnancy test. The use of this phrase dates back to the 1920s. The first pregnancy tests were performed by putting a woman’s urine into a female rabbit.

If the lady was pregnant, the hormone human chorionic gonadotropin would be detected in her urine. Female rabbits may be affected by hCG in the urine of a woman. Rabbit ovaries expand and develop a brilliant yellow hue in response to hCG, which is similar to what occurs to a woman’s own ovaries.

During these early studies, rabbits weren’t the only creatures slaughtered. Frogs and mice were also employed in the experiments. Clinicians developed ways to examine ovaries without harming animals in subsequent versions of the test. While we no longer need to depend on animals to diagnose pregnancy, contemporary diagnostics still assess hCG levels in the urine.

When Did They Stop Using Rabbits To Test For Pregnancy?

In the 1960s, scientists abandoned the use of rabbits to test for pregnancy. They stopped performing the tests that combined hCG, hCG antibodies, and urine. This was because the mixture would clump together in certain patterns.

The “Hogben test,” is a subsequent alternative to the rabbit test. It employed the African clawed frog and produced findings without the need to cut the animal open.

Modern pregnancy tests still look for the hormone hCG in the blood or urine. However, they don’t need the use of a live animal.

Were Rabbits Used For Pregnancy Tests In Humans?

Yes, rabbits were used for pregnancy tests in humans. Physicians used to use a rabbit, mouse, or other small animal to test for pregnancy. Pregnancy tests were performed by injecting a woman’s urine into the ovaries of a tiny animal from the late.

How Did They Check For Pregnancy In The Old Days?

Urinating on grain seeds and checking whether they sprouted was the first known test. In the late 1920s, the first modern pregnancy tests were developed. In this test, a pregnant woman’s urine was injected into animals, causing them to ovulate. These tests required sending urine to a lab and the findings took at least a week to arrive.

Is Rabbit Poop Toxic To Humans?

Yes, rabbit poop is toxic to humans. Rabbits may contain parasites such as tapeworms and roundworms. However, their excrement is not known to transmit illnesses to people. A single rabbit, on the other hand, may produce over hundred pellets in a single day.

Tests for the presence of the hormone hCG are still used in modern pregnancy tests. The use of a live animal is no longer necessary due to medical advancements.

The injected rabbit would only die if the lady was pregnant, according to popular belief. The expression “the rabbit died” became a euphemism for a positive pregnancy test as a result of this.

In reality, all of the rabbits used in the experiment perished. This was a result of the surgical procedure used to inspect the ovaries. While it was feasible to do so without killing the rabbit, most people decided it wasn’t worth the hassle. 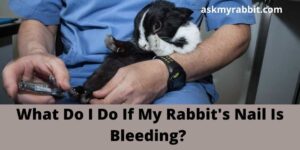 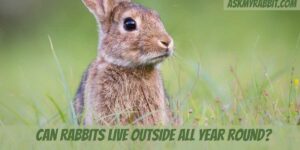